Creamy and hearty - Make Brock's Lazy Boy No Chew Stew from Pokémon the movie! This recipe is dairy-free/vegan and entirely made from scratch. It is such a comforting and warming meal, perfect for the cozy season.

Brock is a character from the Pokémon series and movie. In the first Pokémon movie, he makes this delicious-looking stew that many of us have seen in the movies and craved since then.

Even though Brock calls his meal „Lazy Boy No Chew Stew“ in the movie, it is a popular dish in Japan, known as „Cream Stew“. It is super easy to make!

There are roux cubes you can buy to make it, however, those contain dairy! Making a dairy-free creamy roux from scratch isn’t too complicated, and we show you how it’s done!

🇯🇵 What is Japanese Cream Stew?

Japanese Cream stew, also referred to as a white stew, is a popular Yōshoku dish consisting of traditional meat (chicken or pork), mixed vegetables, onion, carrot, and potato (and cabbage). It is cooked in a thick, creamy white roux.

To make a vegan Japanese cream stew, we are swapping some of the animal products with vegan substitutes.

This is one of our first anime foods to share on this blog and a by-product of our Twitch Cooking Stream Series. We are planning to recreate and share more anime, gaming, and cartoon recipes in the future. If you have a specific idea or wish, you are welcome to share it with us below in the comment section or on our discord server! 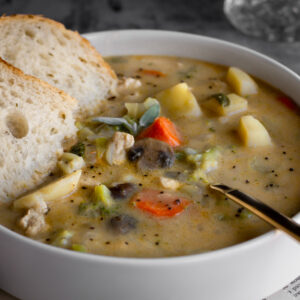