You may never have heard about this dessert since now. Simply put Herrencreme is a German dessert pudding. Translated "Herren" means "Gentlemen", and "Creme" is "Creme".

It is homemade vanilla pudding mixed with (vegan) whipped cream, dark chocolate shavings, and a good amount of rum. The white rum and dark chocolate are the heart and essence of this dessert. The rum needs to be strong enough for its taste to come through, but should not overwhelm the creme. The same goes for dark chocolate. Veganizing this dessert was very dear to my heart because it resembles a piece of my local origin. It’s a piece of home.

Herrencreme originates in Westfalen (Westphalia), which is the area I’m from. It is traditionally eaten after big meals and is especially popular as a Westphalian German wedding dessert. However, since it’s so simple and delicious, it is popular all over Germany on many special occasions nowadays. My family often made this creamy dessert for Christmas. It’s the perfect light dessert, after a hearty and heavy holiday feast.

🤵 Why is it called 'Gentlemen Creme'?

The Gentlemen Creme has lots of dark chocolate and rum added and was intended to appeal primarily to male customers. It is less sweet than most other desserts and specialty cakes. According to the Internet, the name was formed analogously to the German term "Herrenschokolade" (men's chocolate), meaning dark bitter chocolate.

Since we are using plant-based whipped cream instead of a dairy-based one it will keep fresh longer! Store covered in your fridge for up to one week. 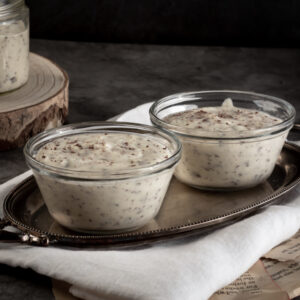 *Vanilla pudding powder: It's best to use Dr. Oetker brand, but other vanilla pudding powders (like JELL-O) work too, just make sure to measure 43g / 1.5 oz  *Vegan whipped cream: You can either buy vegan whipped cream in the store, or make your own out of coconut cream with this recipe.
Keyword dairy-free, German Dessert, German Gentlemen Creme, Herrencreme, Plant-Based, Vegan