This vegan Schnitzel made with seitan is crispy on the outside, and super tender on the inside. A mouthwatering classic turned plant-based! This blog post shows you how easy it is to make flavorful seitan Schnitzel from scratch. The recipe makes a huge batch to freeze, which makes it perfect for meal prep.

Schnitzel is a classic dish in Austria and Germany, which was also a big part of my childhood growing up. Veganizing and sharing this recipe with you is an absolute delight to me! But where does Schnitzel originate from? Who invented it?

Well, there are many theories on where it originated and came from. Just as it often is with classic and old dishes from Europe, it's hard to pinpoint an exact origin. Some theories suggest it came from Northern Italy to Austria and Germany, other suggest it came from France and others say it has been invented in Austria or southern Germany all along.

Fact is, as early as the 12th century, historical records of meat wrapped in dough and then fried in fat can be found. But it is suspected that even in pre-Christian times people turned old bread into crumbs to use as breading in central Europe.

What are the different types of schnitzel?

Traditionally a classic schnitzel is made out of veal meat which is breaded and then fried. However, throughout history, a big variety of Schnitzel dishes have developed. There are even many vegan faux meat brands selling different kinds of plant-based schnitzels in German and Austrian supermarkets!

Depending on the region and what's popular you can find, among many others, the following variations in Austria and Germany:

🌱 What is vegan schnitzel made of?

Vegan schnitzel can be made of different ingredients. Some of the most popular plant-based versions are made out of seitan, celery, soy protein, textured vegetable protein, or tofu. This recipe uses seitan, which is a food made from vital wheat gluten. It is often referred to as "wheat meat" and has a stretchy meat-like texture.

💭 How to make seitan

There are different techniques for making Seitan from scratch. Following I will explain the most common technique, which the recipe below also uses. Mix wheat flour or vital wheat gluten with chickpea flour (or soy flour). As for seasoning nutritional yeast, tahini, or dried herbs can be added as well.

To develop a dough liquid, such as water or broth is added. The dough should be kneaded for just 5 minutes. In some cases, the dough is then rinsed to wash away the starch. However, depending on what you are making that is not always necessary. For a no-knead version mix shortly until combined and let rest covered overnight in the fridge.

After kneading you're left with a springy meaty dough that needs to rest for 5 - 10 minutes.

Once rested, the dough is formed into the desired shape. For example, small nuggets, cutlets, into a 'bird shape' for holiday roasts, and so on.

Simmer and cook the shaped dough in broth. As an alternative, it can be steamed instead of simmered as well. During the first cooking process, the seitan will double, or triple in size.

After first simmering or steaming, the seitan can be prepared as wished: bread, fry, or cook immediately. Alternatively, wrap tightly and store in the fridge for up to one week before using it any further. It can be frozen too.

The broth in which you simmer it first will give most of the flavors to your seitan. Choose ingredients and seasoning for the broth depending on what kind of "meat" or dish you are going for.

🍳 What to use instead of eggs for breading?

The best egg substitutes for breading include aquafaba (brine from a can of chickpeas), plant milk, or plant cream.

However, anything that moistens and will make what you are breading sticky works. A light coating of slightly diluted mustard or vegan mayo works too. Another method is using non-dairy milk mixed with either a few tablespoons of ground flaxseed, aquafaba, or vegan mayo.

This schnitzel recipe calls for aquafaba, but any of the above-mentioned substitutions work.

❄️ How to freeze

After breading before you fry the seitan, freeze in a freezer-friendly bag or container for up to 3 months. Label with the date of freezing and check on it twice a month. To prepare heat oil in a pan and add frozen schnitzel into the pan. Fry until golden brown following the recipe. 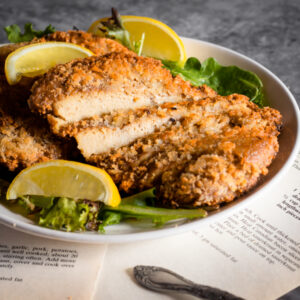 This vegan Schnitzel made with seitan is crispy on the outside, and super tender on the inside. A mouthwatering classic turned plant-based! This blog post shows you how easy it is to make flavorful seitan Schnitzels from scratch.
5 from 7 votes
Print Recipe Pin Recipe
Prep Time 15 mins
Cook Time 1 hr
Breading and frying 30 mins
Total Time 1 hr 45 mins
Course Dinner, Entrée, Main Course
Cuisine Austrian, Egg-Free, German, Vegan
Servings 8 Schnitzel

Stock for cooking the seitan

Shaping the seitan into cutlets

*For other egg alternatives read the egg substitution section above in the article.
Keyword seitan schnitzel, vegan schnitzel